The Pilates method was developed by the late Joseph Pilates. Joseph Pilates was born in 1880 in Dusseldorf, Germany. In the early 1900’s he began developing an exercise system and drew from various disciplines to formulate a system that worked for his own body, and eventually for others around him. 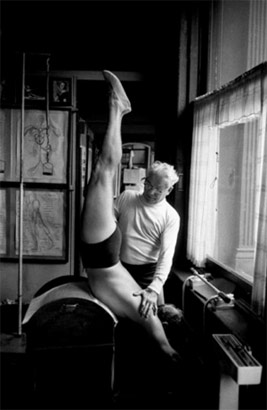 He was a frail and sickly child who developed talents in diving, circus training, gymnastics and boxing. This helped improve his physical fitness and body image. He was living in England training Scotland Yard detectives when the First World War broke out. He was interned in the first world war and taught his method to other internees, successfully maintaining their health through the influenza epidemic of 1918. As a hospital orderly he began working with bed ridden patients. The doctors soon noticed the beneficial effect of the method.

‘We retire too early and we die too young, our prime of life should be in the 70’s and old age should not come until we are almost 100.’ – Joseph Pilates

Pilates moved to New York in the 1920’s, and set up a studio where he worked with the city’s athletes, dancers and actors. His technique complemented their traditional programmes by building strength without adding bulk and balancing that strength with flexibility, giving a toned streamlined body.

With more than nine decades of success, Pilates stands out against other fitness techniques as a tried and tested formula for achieving results.

“It is the mind itself which builds the body” – Friedrich Schiller